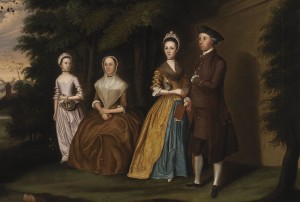 Myth: Girls weren’t allowed to play violin or flute, because their elbows would then be “on show,” and this was considered immodest.

Is it true that girls were forbidden to play the violin or flute in the 1700s? It is commonly accepted that women never showed an elbow, for that would be immodest. In order to play the violin or flute, it is necessary to raise one’s elbows, putting them in plain view and revealing this scandalous joint. Also, men overwhelmingly outnumbered women as violinists and flutists in colonial times, further implying that women were never allowed to play these instruments.

However, it is actually not true that elbows were considered scandalous. It was merely the fashion of the times to cover them up with longer sleeves, and this fashion was quickly changing. Working women wouldn’t have hesitated to roll up their sleeves in order to protect them from the dirt and dust of colonial life. As a matter of fact, this goes for ankles as well. Women sometimes would hike up their skirts and tuck them up away from the ground. Since females were involved in some grimy crafts such as brick-making, and since most women at the time only owned a few outfits, it makes sense that they would go to lengths to protect the clothes they owned. 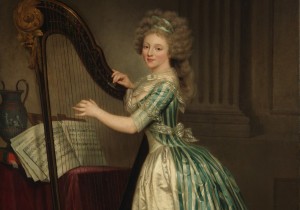 Shorter sleeves became the fashion in the 1790s

Clearly, girls were not forbidden to play violin or flute because of their elbows being deemed “scandalous.” In some countries in the 18th century, we know for a fact that young girls did play the violin. The most notable example of this is the orphanage of girls taught by Antonio Vivaldi in Venice. They grew to be extremely skilled in violin. Women violinists do not seem to have been the case in America, however. Men definitely made up the majority of violinists and flutists. The most plausible explanation is that the violin and the flute were considered masculine instruments, and therefore women would never learn to play these unladylike instruments. Perhaps these two instruments prevented one from singing, a very popular skill for 18th century women, and thus something like a guitar was considered more suitable. Whatever the case is, it is true that particular instruments are identified with a certain gender, even in today’s society. Curiously enough, the violin and the flute are both played by mostly women today. It is doubtful we shall ever know the reasoning behind this, but we can conclude that it wasn’t those “scandalous” elbows that kept colonial women from playing the violin or flute.

The Wiley Family by William Williams, 1771