In this weeks installment, I have chosen to write a little about the Lenape style of gardening and food preparation. These are two important ways, that people in general, have to survive. Without food, we surely would not be here! Methods of gardening would obviously differ from the agricultural, industrial, and large scale production methods we know of today. It is always a good idea to take a step back to the roots of our region, and ours being here in Pennsylvania and surrounding areas, to see what types of food would have been hunted and foraged and also grown through the use of subsistence gardening/farming methods.

The local European population was very much aware of the presence of Lenape people and owe much to their understanding of the landscape, weather patterns, and the types of flora and fauna present at the time in order to survive.

From April to October, much of the planting, weeding, and food cultivation was done by females of the Lenape tribe. A common variety of “Indian corn” grown was much different than what we know of as a typical corn cob and plant today. Roughly 4 inches in size with only about 8 kernels, this variety was found in early Munsee related sites. Once the early Dutch settlers arrived to the area, a larger and more hearty (soft and hard) corn were grown. The “heirloom” looking white, red, blue, yellow, black, brown, spotted, and tan corn was grown along with what are known as “sister” plants. Commonly known in many native societies, squash and beans were grown along with the corn plants. The vining beans and squash would be held up by the strong corn stalks. Other crops, such as tobacco, sunflowers, and pumpkins would have also been grown. Many of these crops were both eaten daily and stored for later use when the colder fall and winter months were to arrive. Some other foods that were foraged were strawberries, raspberries, huckleberries, blackberries, currants, gooseberries, plums, crab apples, grapes, onions, cabbage, water lily roots, may apple, swamp potatoes, hazelnuts, hickory nuts, chestnuts, beechnuts, walnuts, and acorns. 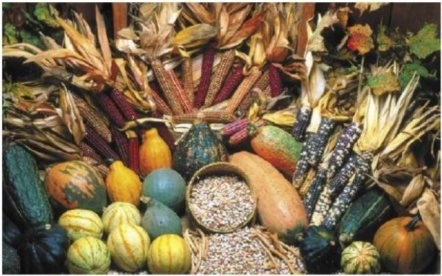 Beans were boiled and dried, clusters of corn was hung to dry by its braided husks, pumpkins and other types of squash, berries, roots, fish, and nuts were dehydrated in the summer sun. Many or all of these types of foods were stored away in many different ways. They were either completely processed first and turned into a type of flour, cut apart, boiled, or dried “as is”. Storage pits were a commonly used area of storage, as well as granaries either attached to or located close to a nearby shelter. Skin pouches, earthenware jars, bone containers, wood, or baskets were also used as a place to store the food items in when they were stored in and around the home. Before food could be stored each year, dried corn cobs and/or grass could be set ablaze inside the storage pit to kill off field mice and other critters that would otherwise eat the newly replenished food supply.

For a type of corn hominy, dried corn was taken and boiled with wood ash. This process allowed the hulls to come off and kernels would then swell in size and soften. The repeated washings in the final process removed all wood, ash, and lye from the hominy. Dried corn was also ground into flour or meal in order to make bread or sapan which was a cornmeal type mush similar to grits. Often times corn would be eaten by grilling right in the fire or boiled and paired with fish, beans, and other vegetables. Berries, honey (a European introduction), and maple sap were used to sweeten different foods. Meat (deer, elk, bear) and fish had to be completely cooked and was almost always never eaten rare or raw. Food was also not eaten at set times. Corn was eaten in some form almost daily and fish, wild game and plants, roots, nuts, berries, seeds, tubers, and other vegetables were eaten along with the corn.

Nuts were easy to preserve over time and were roasted in their shells under the ashes in a hot fire. After this, they were crushed/ground with the shell intact and boiled. Once boiled, the oil would float to the surface. This oil was reserved in a separate container for cooking and also used medicinally for healing practices. Pulverized bones from meat were boiled in water – this allowed the collagen and fat to float to the top. This was also used for cooking and for use on the skin and hair to protect against bugs. Meat from deer, elk, bear, and other animals was typically cut into thin strips and dehydrated to make jerky or smoked over a hot fire to preserve it. The dried meat would be pulverized and added to soups and stews or carried around and eaten just as a dried jerky to stave off hunger if one was on a long journey. Birds were also eaten. Pigeons and duck were a common variety. 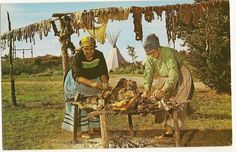 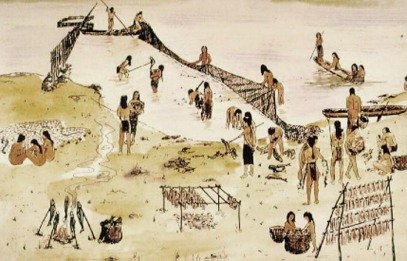 The way food was prepared was also a process that required a lot of time and specific techniques and tools. Types of materials that tools were made out of would have been bone or stone  that were shaped and sharpened for a specific purpose; sometimes foods were simply eaten with the hands. Bowls were often made of bone from the shells of turtles, scull caps of other animals, or carved wood/tree bark. 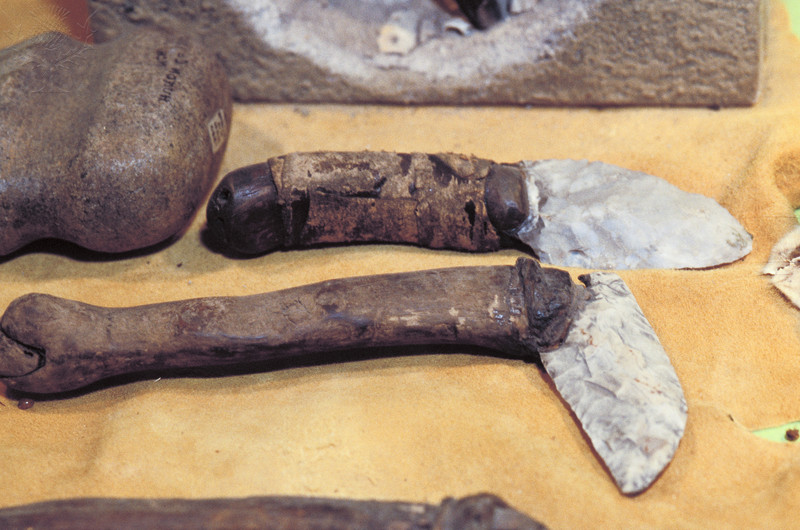 Much of the way the Lenape lived in the pre-Colonial era was the same up until the time Europeans arrived. Upon their arrival, it was the Europeans who were largely influenced by methods of agriculture, foraging, and hunting in an area that were not particularly familiar with. Over time, the Lenape also adapted to Colonial methods of farming and hunting using metal tools and weapons.

The influence each group had one one another was immense and allowed for the cultural sharing of techniques important for the survival of both groups. Even though we live in an industrialized and convenience based society today, it is important that we understand the place from which all of these methods of production began. Something that seems like it came from a more “simple” time was actually not always reliable and could have been the demise of individual people groups because the weather was not exactly the same as it was in previous years and that would have changed the landscape in the flora and fauna present (or not) and the way the landscape weathered during certain seasons. This would have affected subsistence methods of farming and hunting.

Even though the methods of food production were not always reliable, we do recognize the importance of the many valuable lessons and appreciation for some simplicity that has been almost lost over time with the invention of mechanized large scale production. If you have your own backyard garden, understanding the subsistence method should be pretty clear. Sometimes the crops you may rely on for your daily meal constitutes a lot of time and effort, but it is a way to see the difference between the generic store bought produce and the fresh, nutrient rich food that is grown in your own yard. There is a lot to be learned from the local population of Lenape that lived in this area. They were not only aware of the landscape they inhabited and found methods of hunting, foraging, and subsistence gardening to benefit themselves, they also utilized the remains of animals, plants, and stone from the area surrounding them to create the tools to allow them to do the best job possible from farming to preparing food and then to eating it.

Next week, I will talk a little bit about the Lenape of the past and their customs regarding the family, marriage, and women’s role in the tribe.