This week, we are highlighting some of the demonstrators who will be joining us this September 12th-13th for Chadds Ford Days!  This interview is with Marie Elena Stotler, who crafts historic bee skeps by hand.

How did you end up in Chadds Ford Days, and how many years have you attended?

I became friends with the head of the demonstrators at the Chadds Ford Historical Society and eventually I became the head myself.  1979 was my first year attending Chadds Ford Days.  I borrowed a dress that year from one of my friends who was a Mennonite.  The next year, it was made sure that I got a real reenactors dress.

What is your craft and how did you get started in it?

I make bee skeps by hand.  I learned how to make them from a class taught by an Amish man in Lancaster.  I just wanted to make one for my garden, but here we are.  I started making them when I was 29.  I now have had my crafts featured, for example, I was featured in Country Garden, both in 1995 and in this past January.  I have also been invited to the White House to make an ornament for President Clinton.

How did this play into the lives of colonists around Chadds Ford/what is its historical significance?

Bee skeps were brought here by immigrants.  There were no honey bees in America, so the immigrants brought them in baskets.  “Skep” means basket, and it goes all the way back to the Egyptians.  The skep is used to contain swarms of bees.  If you manage to find the queen, you can keep the swarm.  They go anywhere she does.  You would put it on the ground or on a shelf outside and the bees would make honey inside of it.  In 1850, the wooden beehive was invented by a Philadelphia clergyman named Langstroth.  He was a beekeeper and he did it to take care of the bees.  There are elements to his beehive that really help to take care of the bees.

What do you want people to remember about your craft?

It is easy to do but it takes a long time to complete.  It takes 40 hours to make one, which is a school week.  I collect my own rye every June with a clipper.  I’m one of the only people who do it anymore, because it is hard work and therefore no one wants to do it.

Are there any interesting facts/common misconceptions surrounding it?

You do need to soak everything in water before making the skep.  It takes about 4 hours of soaking.  So for Chadds Ford Days, I have to plan everything out beforehand.  I soak everything the night before so I can actually be making it when people come by.

Make sure to stop by and check out the bee skeps at Chadds Ford Days 2015! 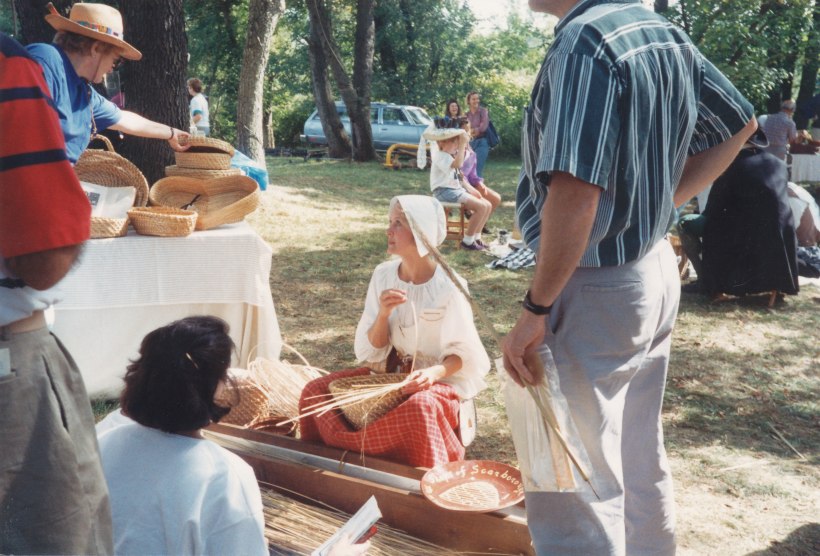