Myth: The phrase “Don’t Throw the Baby out with the Bathwater” originated in colonial times, and it referred to the bathing practices of the time. In a household, the father would bathe first, then the mother, and then the children, oldest to youngest. Everyone would use the same water, thus by the time the baby got its bath, the water would be so filthy that there was danger of “throwing the baby out with the bathwater.”

Many quote this phrase when talking about bathing habits of the American colonists and assume that the phrase “Don’t Throw the Baby out with the Bathwater” came from this time period. It is commonly believed that a typical colonial household would not bathe more than a few times every year. Thus, when the household did bathe, they would go in order of oldest to youngest, and eventually make the water so dirty that the baby could easily be lost in it.

It is true that indoor plumbing wasn’t even invented until the nineteenth century, and therefore, up until that time, people did not take baths very often. It was too much work to haul all the water up, heat it up, and then dump it at the end of the night. Because of this, American colonists most likely did not bathe more than twice a year. However, this does not mean that colonists did not wash themselves. Many households from this time period did have washbasins, as shown in their inventories. Colonists would therefore have taken sponge baths, and most likely have done so daily. It’s not that they did not care about cleanliness, but rather it was simply much more difficult to attain than it is for us today. 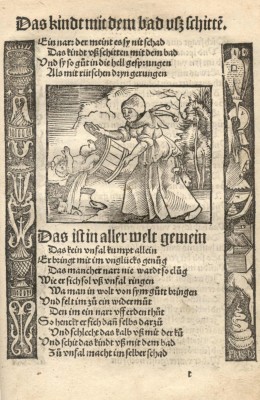 Perhaps people did bathe from oldest to youngest, like the myth states. However, it is unlikely that the water would be so dirty you could lose a baby in it.

The real problem with the myth, though, is that the phrase “Don’t Throw the Baby out with the Bathwater” was around even earlier than the 1500s. The phrase was a common German proverb and used by many well known writers.  The earliest known reference to the phrase is in Thomas Murner’s Narrenbeschwörung (Appeal to Fools), which is dated 1512.  The phrase was also first used in English by Thomas Carlyle in his essay against the evil of slavery entitled Occasional Discourse on the Nigger Question, from 1849. He used it to make the point that while we must get rid of slavery (the dirty bath water), we must not forget the wellbeing of the slaves (the baby) as we do so. After the late 1800s, the phrase was well known and commonly used.  Unfortunately for the myth, it is clear that the phrase “Don’t Throw the Baby out with the Bathwater” did not originate from colonial times, and did not even originate from America.

So this myth does not have much truth to it, as neither the history of bathing nor the history of the phrase back it up. However, the myth does provide an amusing (though fictional) story, and reminds us how fortunate we are for the invention of indoor plumbing.